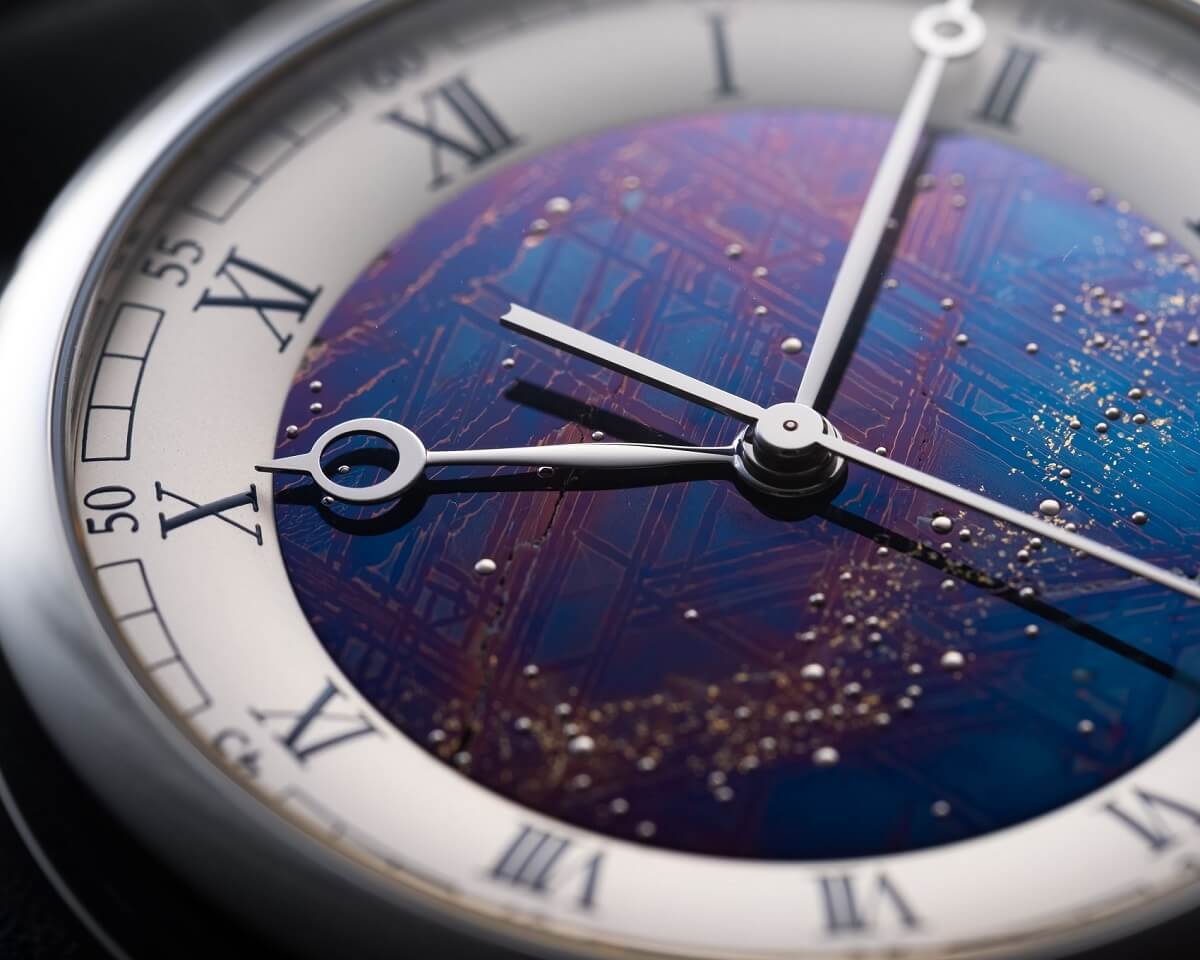 And it is in the very heart of stars, where our thermometer would show a few million degrees, that iron meteorites are born. This powerful and poetic energy then gives birth to a new star, or even a galaxy.

Created from a meteorite, the DB25 Starry Varius Aérolite becomes the witness to this chaotically orchestrated force. De Bethune has enriched its dial with a starry sky emblematic of this timeless material. Thus, a moment is engraved where time has ceased to exist.

"The cosmos, time, the sky... when you want to see time evolve and you have no instruments, you observe the sky. This is one of the recurring themes in watchmaking," explains Denis Flageollet, Master Watchmaker and creator of De Bethune. Constantly in search of innovation, it is in the diversity and simplicity of nature that De Bethune carves its most beautiful creations.

The DB25 Starry Varius Aérolite will be limited to a production of five pieces per year.

Beauty from above and beyond

Denis Flageollet, founder and Master Watchmaker of De Bethune, is passionate about meteorites. A passion that he nurtures by regularly trialling iron ore reduction processes with a view to one day making his own metal. His deep-felt interest in the material and his numerous attempts with Russian and Egyptian meteorites have led the Maison to work with a new kind of meteorite: Muonionalusta Meteorite.

Believed to have struck planet Earth more than one million years BCE, somewhere between Finland and Sweden on the banks of the Muniono river, this is probably the world’s oldest known meteorite to date. The first fragment was discovered in Sweden, in 1906. Composed mainly of iron and nickel, it is distinguished by the perfectly geometrical lines of its 60° angle cross-hatched “Widmanstätten” pattern.

The dial of the DB25 Starry Varius Aérolite is adorned with an ancestral stone forged in space. A metal alloy that endows the dial with a distinctive texture, along with geometrical patterns aligned in a precise way that makes each timepiece special and unique.

De Bethune’s mastery of the thermal oxidation of metals has once again enabled it to raise the level of complexity by creating a starry sky accompanied by its Milky Way on a previously blued meteorite dial. This azure shade results from the heat released by the chemical reactions of the heated meteorite.

Dotted across this blue dial surface is a multitude of small white gold pins, delicately driven in between the different shapes and thicknesses of the octahedral geometrical structures. Like tiny, suspended marbles, these glittering flashes of light endow the celestial vault with its aura of timeless depth. In

addition to bringing a unique fragment of space to the wrist, each sky is different: the customer can choose a given constellation, according to a precise sky map, at a specific date, time and place

The watchmaking art according to De Bethune

Inspired by the classic round shape, the ultra-light polished titanium case of the DB25 Starry Varius Aérolite with its perfectly integrated openworked lugs nevertheless asserts De Bethune's contemporary expression of the art of watchmaking.

Taking up the graphic codes of the Manufacture, the new reference features a Roman numeral hour circle and an Arabic numeral minute track on a silvered disc, complemented by hand-polished steel hands identical to those already featured on the dial of the DB25 Starry Varius.

Thanks to the double anti-reflective treatment of the sapphire crystal, the underside of the watch reveals an outstanding workmanship that benefits from the latest De Bethune technologies.

Gravity is one of the greatest enemies of mechanical watches. Based on the tourbillon that Abraham-Louis Breguet invented for his 18th century pocket watches, De Bethune has sought to optimize it on today’s wristwatches. The equation? To be more efficient on a wrist engaged in rapid and disordered movements, the tourbillon must have the highest possible frequency and fastest rotation speed. In creating a titanium and silicon tourbillon with a frequency of 36,000 vibrations/hour, an extraordinarily light carriage (0.18 grams, the lightest ever created in the industry) spinning on its axis every 30 seconds, comprising a total of 63 components (the lightest of which weighs less than0.0001 grams!), this feat is easier to describe than to achieve.

The 42mm-diameter watch is equipped with the mechanical manual-winding DB2109V4 calibre, entirely designed, developed and produced within the De Bethune workshops in L’Auberson, Switzerland. A jumping seconds display ensures precise read-off. * The balance wheel, also visible on the back of the watch, is of the latest generation. It is the result of a constant physical and mathematical approach by De Bethune to improve its functioning. It benefits from the latest advances, with an adapted diameter, made of titanium, equipped with small white gold weights placed on the outside, which gives it a remarkable quality of inertia, reliability and regulation.

De Bethune has equipped this model with its very own balance spring, the extremely thin component regarded as the soul of the mechanical watch. Its centre of gravity is maintained in the very centre by means of a flat curve affixed to the outside of the balance spring. Differences in the thickness of the blade further enhance the almost perfect precision of its concentric development. The numerous advantages include reduced thickness, improved adjustment of the concentricity quality, finer adjustment of the index (regulator) and no more need for its pins, while the shape of the curve even acts as a shock absorber in case of impacts.

*The test report on the watch, measured in six positions, indicates the excellent results achieved by the model, with 0.00 sec. /day in all positions. This confirms that combining the jumping seconds complication with the tourbillon has in no way been detrimental to the precision of this chronometer.

A crystallized moment, a testimony to the very birth of a galaxy! De Bethune once again pays tribute to the power of nature, that pure and unreserved power.  "No other metal is as charged with pure energy and emotion as the iron meteorites that have taken shape in the furnace of the stars," Denis Flageollet tells us.