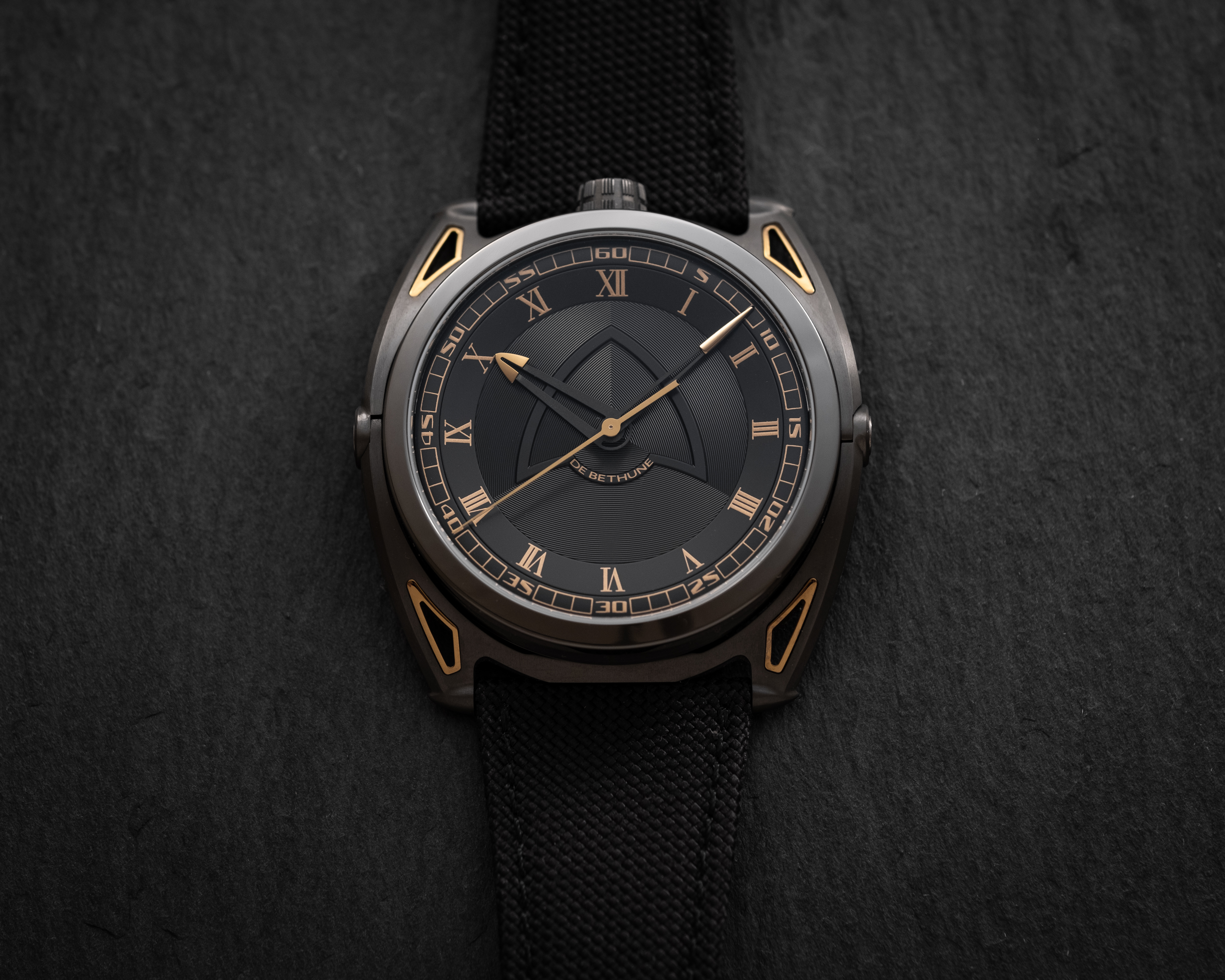 The dramatic contrast between black and gold gives the new DB27 Titan Hawk JPS a clean but subtly elegant technical feel, echoing the influence and heritage of competitive motorsports, as well as the advanced features of the caliber AUTOV2.

The Latest Version of the Iconic De Bethune Titan Hawk

The DB27 Titan Hawk JPS is the newest member of the Titan Hawk family and continues the line’s combination of advanced technical features, practicality and wearability, and clean, distinctive styling in a timepiece that pays homage to the golden age of competitive motorsports of the 1970s.

The heart of the DB27 Titan Hawk JPS is the caliber AUTOV2. Like the engines found in the most cutting-edge racing cars, the AUTOV2 has been optimized for strength, precision, and performance and takes advantage of the most modern materials and methods to create a movement intended to be the last word in performance watchmaking.

The caliber AUTOV2 offers a sixty-hour power reserve from a single mainspring barrel, and features De Bethune’s signature titanium balance, with white gold inserts. The balance, as the element which regulates the precision of the entire watch, must possess certain technical features including optimum mass at the periphery as well as low mass elsewhere – a goal which De Bethune has explored and mastered over two decades of refining the design of this most essential element. Combined with the patented De Bethune balance spring, and a balance bridge fixed at two points on the movement plate for maximum strength and stability, the AUTOV2 is a sophisticated expression of both striking aesthetics and precision engineering.

The case of the De Bethune Titan Hawk JPS is in black zirconium, a high-tech, high-strength, hypoallergenic and lightweight material offering superior technical advantages in comparison to standard sports watch stainless steels. The wearability of the watch is further improved by the signature De Bethune articulated “floating lugs” with their ogival tips, which allow the watch to conform perfectly to the owner’s wrist whether large or small. Finally, the design of the case and dial expresses De Bethune’s long-standing commitment to both technical and aesthetic excellence, with yellow titanium accents contrasting with the black zirconium case body, in an echo of the John Player Special Formula One livery used by the F1 Lotus team.

The Origin of the DB27

It was in March 2018 that De Bethune’s manufacture introduced the latest in-house self-winding caliber; the AUTOV2, the beating heart of a timepiece with a modern twist. Indeed, the DB27 Titan Hawk JPS draws its inspiration from the design and technology of its predecessors while adding an innovative touch. Slim lines, a black microlight dial, sandblasted titanium minute hands with hand-polished tips, a microlight case middle, and brushed lugs and tinted open back are all key elements of the design – making for a watch that stands out not only for its sleek design but also for its entirely in-house movement.

If the inspiration of the original DB27 Titan Hawk model is very quickly perceived, each detail is rethought and reworked to find the elegance and readability of an object above all designed for maximum functionality. Juxtaposing Roman numerals for the hours and Arabic numerals for the minute track, the reading of the time is given around rings located at the periphery of the dial.

Focusing on the essentials, the DB27 Titan Hawk JPS is equipped with the AUTOV2 caliber, hour, minute, second, which features a single barrel providing 60 hours of power reserve. The last titanium balance with white gold inserts remains visible on the back of the watch.

Thanks to the technique still developed in-house, the movement is equipped with an optimized oscillating weight for the automatic winding system, made of titanium and white gold allowing it to power with maximum efficiency, and with the visual elegance so characteristic of De Bethune’s watchmaking – combining a deep celestial blue with the cool gleam of white metal, a signature De Bethune design code for many years.

Constantly refining the structural nuances hovering between dark grey and deep black, while sparingly adding golden accents that are in fact yellow titanium – was a new opportunity to demonstrate De Bethune's expertise in working with the oxidation of titanium and its color palette.

De Bethune blue, the brand's historic and pioneering signature, is now succeeded by a golden yellow color, for which the creative process required new assembly techniques and new texturing skills – all of which Denis Flageollet and his team have developed to bring the project to fruition and thus pay tribute to this formidable era of high-tech discoveries.

Finally, the DB27 Titan Hawk JPS meets De Bethune's sporting, technical, and aesthetic aspirations. All the aesthetic codes of the Manufacture can be found in this model: the patented floating lug system with its famous cone-shaped tips that are more prominent than ever, comprising polished yellow grade 5 titanium inserts recalling the side of the case, the 12 o'clock position of its crown, a microlight decoration on the case middle, and the black microlight dial (microlight is a form of decoration unique to De Bethune, which improves on traditional guilloche to produce unique visual and optical effects).

Machined in a 43 mm case in black zirconium with a microlight decoration on the middle, accompanied by a black canvas strap, the DB27 Titan Hawk JPS is also an exception expression of the De Bethune rule of wearer comfort.

The result is a construction that adapts particularly well to the size of each wrist and the way it moves.

The DB27 Titan Hawk JPS is available as a limited series sold exclusively through De Bethune.