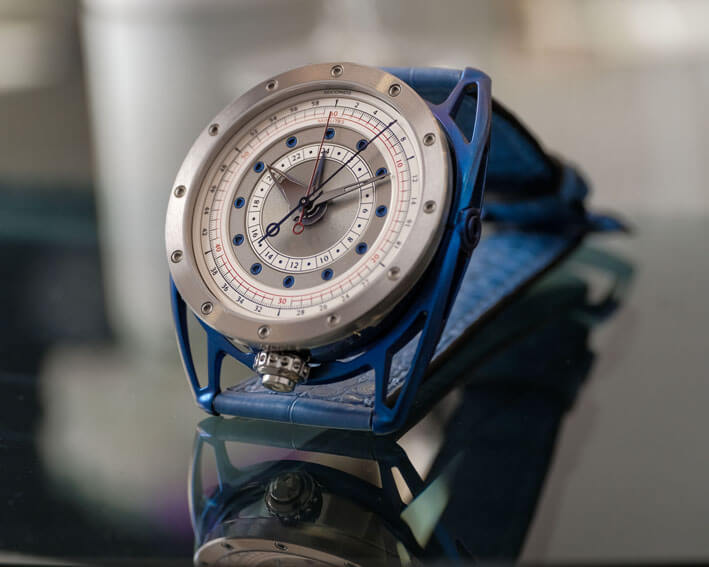 Simplification can sometimes be singularly complicated.

This is the first reinterpretation of this revolutionary chronograph designed in 2006.

A model that was pure, absolute and radical in its approach, thanks to its principle of five hands mounted on a single central axis and controlled by a simple single pusher... De Bethune now presents the first reissue of this chronograph which has become an icon for Fine Watchmaking connoisseurs

Only ten of these timepieces will be produced.

Building the watchmaking of tomorrow by imagining what the great Master Watchmakers of the 18th century might have created today. Deconstructing so as to eliminate unfounded assumptions; pushing back the boundaries of knowledge; exploring new horizons... And returning to mechanical and aesthetic aesthetics embodying a perfect balance.

First presented in 2006, the first DB21 "Maxichrono" was born from a precise and clear vision of the chronograph in the mind of Denis Flageollet, Master Watchmaker and co-founder of the Manufacture De Bethune.

The vision? To create watchmaking’s purest and most absolute chronograph. To endow it with a resolutely contemporary expression. And to rethink its design, along with its architecture and technical construction.

No one had yet dared to take such a radical path. The result? A timepiece that remains revolutionary in many ways, resulting from an approach that is free of any acquired knowledge or preconceived ideas. In the centre, on a single axis, are five remarkably mounted hands following a vertical sequence of carefully fitted pillars and wheels... a real technical feat.

This extremely pared-down system paradoxically requires extremely complex development involving a mechanism that operates with several interdependent column wheels, all five axes in the centre, embedded into each other and yet working independently. Each can be zero-reset on demand, and autonomously restart. And as if to push the limits of technical and aesthetic purity even further, everything is controlled by a single pusher at 6 o'clock because this is the easiest position to access the controls quickly and simply when the watch is on your wrist. It is all the more convenient in that the case is fitted with the famous patented De Bethune floating lugs.

Thus eliminating multiple counters that create visual distraction, the result is a timepiece that resembles sports timers designed for actual timekeeping work; a real reading of chronograph counters, seconds counter, minutes counter and hour counter; along with an ability to measure long times, thereby offering a real timekeeping range of up to 24 hours in a row (whereas the usual de facto limits are 9 to 12 hours, and 30 to 45 minutes) with tenth-of-a-second accuracy.

Beating at a frequency of 36,000 vph, enabling fifth-of-a-second readings, the DB2030 movement is equipped with the De Bethune absolute clutch*, a patented system resulting from more than seven years of research and development.

The DB21 Maxichrono is a reliable and precise time-measurement instrument that is both aesthetically pure and highly readable. Endowed with a remarkable four-day power reserve (one of the longest on the market), it proclaims a classic heritage that is smoothly combined with modernity in a highly distinctive aesthetic balance.

Today, 13 years after presenting the first prototype, De Bethune is for the first time introducing a re-edition of its famous DB21 Maxichrono, crafted on this occasion in grade 5 titanium. De Bethune remains to date the only Swiss manufacturer to have presented such a pure and accomplished chronograph.