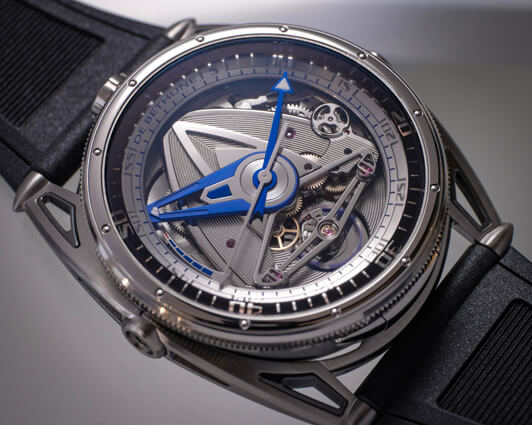 A new calibre; water resistance to more than 100 metres; excellent readability including in the darkest depths thanks to ingenious lighting inside the movement and a new photoluminescent blue, a different bezel that rotates this time with the crystal to indicate dive times; a titanium case for a light feel and a rubber strap for convenience; along with a five-day power reserve.

Placing innovation at the heart of the creative process. Adopting a continuity-based approach with regard to the work undertaken by the master-watchmakers of the Age of Enlightenment. Integrating creativity! Driving innovation ! Veering firmly off the beaten track! Not repeating, but instead inventing; pursuing ingenious reflection while improving precision, reliability, readability and comfort: the DB28GS Grand Bleu was designed and developed to be a resolutely sporty watch, adapted to the active life of today's men, while cultivating the aesthetic elegance cherished by De Bethune.

Just 10 years ago, De Bethune began developing timepieces with a more contemporary spirit with the first DB28. Already at that time, De Bethune's founder and Master Watchmaker, Denis Flageollet, an outdoor sports enthusiast, felt the need to create watches adapted to an active lifestyle. In 2015, the first DB28GS was launched.

Particularly ingenious lighting
Based on the observation that a sports watch must be perfectly readable in any kind of weather and every possible situation, a special lighting system has been developed.

To illuminate the watch and the movement from the inside, the slightly bluish white light source is produced by a fully mechanical means that works on the dynamo principle.

The result is as simple as the lighting of a bicycle, fully mechanical with no electronics and no battery. A pusher at 6 o'clock activates a small gear train driven by the twin barrel. This gear train, by means of a miniature dynamo, provides the necessary energy for lighting the watch. A few seconds of light is more than enough to read the time, even in the middle of the night.

To complete this ingenious system, Denis Flageollet, in close concert with James Thompson, researched a new blue photoluminescent material to improve the readability of the hands, indices and timer whilst remaining true to De Bethune's hallmark colour spectrum.

The main research focus was on developing a material containing crystals capable of two different color emissions: one for daytime, allowing the De Bethune blue to come through for full effect in natural light; and one for nighttime, with the same crystals now glowing with a radiant luminescence, and always remaining faithful to the iconic blue.

The result is unprecedented, and truly unique: A new blue, bright, deep, luminous, of an ardent and elegant tonality, that casts the perfect De Bethune blue during the day, and yet radiates the same tone in the dark. This exclusive luminescent material, named Blue Moon, was developed in partnership with the Swedish company Black Badger Advanced Composites (James Thompson) in collaboration with Swiss SuperLuminova™ and is now proprietary to De Bethune.

A bezel that rotates the crystal
The rotating bezel made its first appearance in watchmaking in 1952. It serves to enable accurate calculation of immersion time, as well as the transition through various decompression stops. of the different levels. Generally, all the numerals relating to the minutes counter are indicated on the bezel, which tends to create a more crowded visual effect.

For the DB28GS Grand Bleu, these indications appear on the sapphire crystal driven by the bezel. This developed in the workshops of the Manufacture in L’Auberson enables the model to remain elegantly slender and instils a pleasing casual chic aesthetic.

A new calibre, the 27th bearing the De Bethune signature
Hand-wound, with central seconds and a five-day power reserve indicated on the dial, this is the 27th calibre entirely developed and manufactured by the Manufacture De Bethune, equipped with a state-of-the-art in-house-made balance wheel.

The presence of the titanium / white gold balance wheel and balance-spring with flat terminal curve ensures an ideal mass / inertia ratio for an optimal frequency of 28,800 vph suitable for wristwatches.

It is endowed with numerous properties – such as optimised efficiency, reliability, regulating quality, thermo-compensation, anti-magnetism – leading to concrete results, since De Bethune has already improved the efficiency of its sprung-balance-escapement ensemble by achieving a 20% increase in power reserve.

The calibre is also equipped with the triple pare chute system. De Bethune was not only the first to design a bridge symmetrical held on both sides and thus serving to maintain the balance wheel perfectly in position, but also added two shock absorbers on either end as well as that of the balance wheel itself. Hence the name triple pare-chute.

Watertightness, shock-resistance, wearer comfort
Finally, the DB28GS Grand Bleu does not escape the special attention devoted to the refined work of hand-crafted finishing performed within the company workshops in L’Auberson, such as blued titanium components, zirconium case middle and Microlight decoration.

Water-resistant to 105 metres (10 ATM), the DB28GS Grand Bleu is no exception to the strict rule of wearer comfort that De Bethune applies to its models in general and particularly to the DB28 collection. This exceptional comfort stems from a combination of the light feel of the titanium case, the softness of its hand-polished finish, the 12 o’clock crown position and above all the presence of the patented system of floating lugs that adapt to wrist size and movements.

For the DB28GS Grand Bleu, the lugs have been completely redesigned in a medium size tailored to the sporting spirit of the watch, featuring the famous cones that are especially prominent in this model and adorned with black zirconium inserts recalling the sides of the case middle.

The model is delivered with two straps: a canvas version and a striated natural rubber iteration with titanium folding clasp, which also contributes to the practical and pleasant wearer comfort of this timepiece.