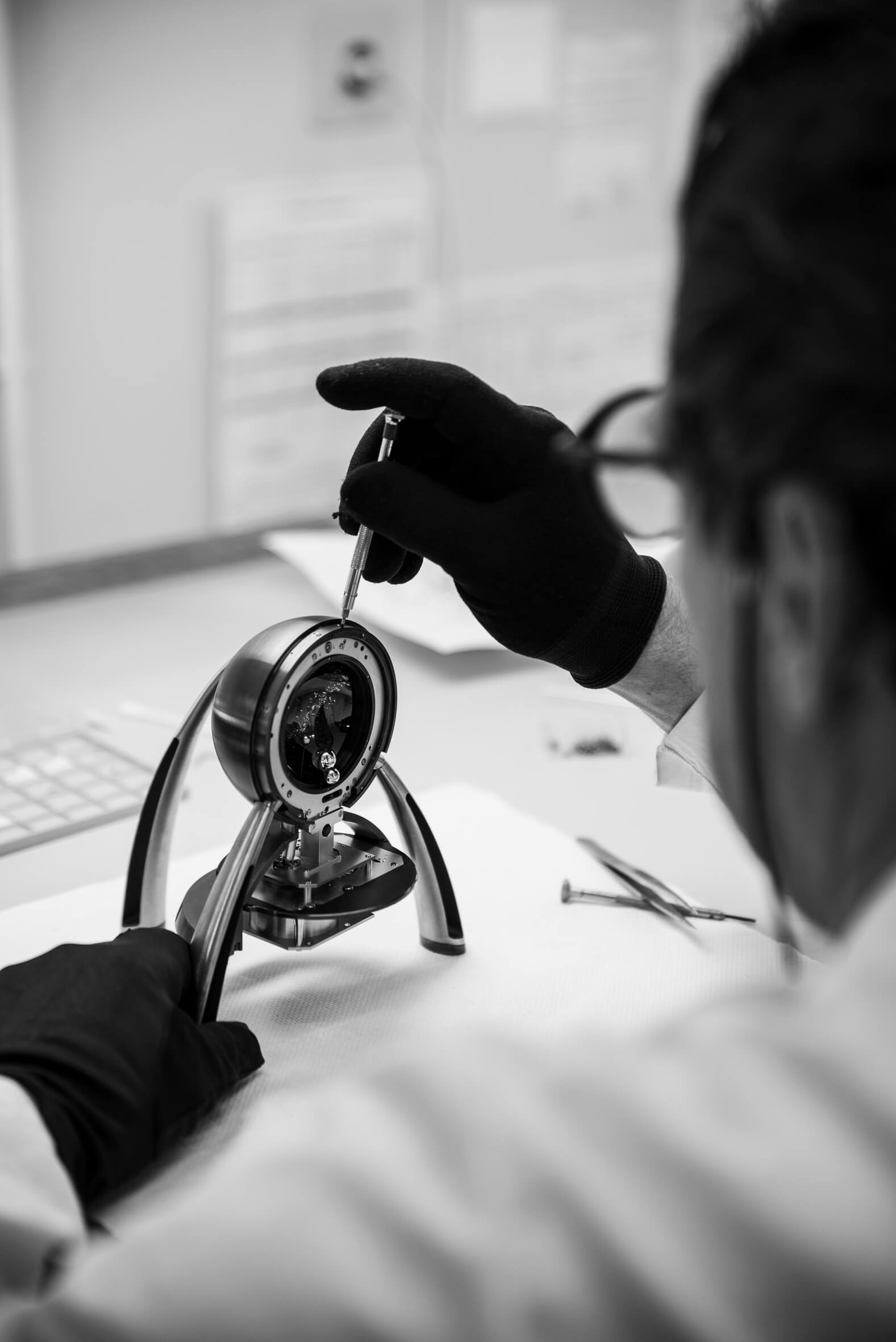 A moon phase with an accuracy of 5.7 seconds in a lunar month, or 1 day every 1225 years – which corresponds to an accuracy improved by a factor of 457 over conventional moon phase watches.

It’s contemporary Art mechanics taking us to a different place in time and space with the unique creation that is Dream Watch 6.

Art mechanics implies a very particular know-how, and it is fast becoming a lost skill. Contrary to popular belief, a clock is not just a bigger watch. The mechanical object is a question of balance and harmony between each and every component taken separately and as a whole. It is a different way of working and understanding the object that is considered more instinctively, holistically, with a comprehensive aesthetic. Complexity is increased exponentially. Surfaces that are now expanses need to be broken down proportions redefines for more lightness. The new volumes are thus more generous and airier than in a watch, and thus require an acute sense and ability to adapt.

Denis Flageollet, who has lost nothing of his passion for timekeeping objects and has worked on many of them, conceives of and creates De Bethune clocks that combine the traditions established by of 18th-century Master Watchmakers with contemporary art mechanics.

Faithful to the spirit that drives De Bethune, each clock project originates in the juxtaposition of watchmaking history during the Enlightenment, of various techniques both for the movement and for the finishing, alongside the spirit of modernity that characterizes De Bethune's identity.

In other words, to develop these objects, is to have an intimate knowledge of what has been done in the past and what is being done present, and to draw from both in defining one’s sources of mechanical and aesthetic inspiration. The historical and emblematic pieces resulting from 400 years of watchmaking history are the foundations on which today's creation is based.

De Bethune presented his first clock movement in 2003. It was inspired by the marine chronometers so dear to Denis Flageollet, a great sailing enthusiast, then came the mysterious Stellar Clock with its two sphynxes, and finally the famous Helicopter Clock created in 2015. At the core, Denis’ approach has always been emotional. Each of his creations allows a better understanding of Art mechanics, which really comes through in a larger volume, a bigger space in which to unfold – rather than in a watch where the mechanics are ultra-condensed.

With the Dream Watch 6, De Bethune yet again looked up to the sky, to represent in a more meaningful, more contemporary manner. The initial idea is simple: to transpose the De Bethune sky to a clock and in doing so utilize to the fullest the larger volumes afforded to express it – even transcend it.

More space, more depth: The night sky of De Bethune becomes even more magical. The more generous volume offers it a more experienceable cosmos. The moon takes up a more even-handed proportion in our unconscious. The two spheres, for hours and minutes, play with volumes. It all comes together in a whole that allows one to marvel at a completely new vision of the planets, the sky, the cosmos, our environment, all in harmony and beauty.

De Bethune is one of the very few manufacturers to master the know-how of clockmaking. Thanks to the skill of some of its watchmakers, the 180-component hand-wound mechanical movement 1318-010, adapted to the design and equipped with a constant force escapement, displays the hour, minute and moon phase functions with an accuracy of 5.7 seconds in a lunar month, or 1 day every 1225 years, which corresponds to an accuracy 457 times higher than conventional moon phases – an improvement by a factor of ten compared to the De Bethune standard. 18,000 vibrations per hour. 8 days of power reserve.

For the casing, a casual exchange between Denis and his friend Jörg gave rise to the obvious idea of a collaboration. Sharing a creative vision and passion for unique watchmaking objects, together they worked in close concert for 18 months to create a new piece.

Jörg Hysek, a visionary artist whose star has been shining high above Swiss watchmaking for decades, continues to surprise with ways to tell time – always with a fresh artistic intention. Driven by his own vision and creativity, he literally immersed himself in De Bethune’s spirit and the multiple strands of the brand's DNA.

We find these references in the tense curves that characterize De Bethune, in the use of titanium, the vibrant color of the immediately recognizable hallmark blue, the famous De Bethune lugs in the feet as well as fixing points, the polished bezel that gives a true clarification of the reading of the time, the vision of the inside of the mechanism through the lower part of the part... All these elements that make the signature of De Bethune watches find themselves reinterpreted and re-orchestrated to create this object of art mechanics.

What Jörg Hysek conceived of and designed is a mechanical sculpture, with a creative aesthetic that gives off a force that speaks to lovers of the truly exclusive. Challenging the known and assumed, he expresses his sensibility to the mechanics of time. This clock is new, unique. The feet, for example: In addition to their almost sensual refinement and the role they play in design, the three legs have the double function of keeping it upright on a table, or to laying it down, as in a cradle so it can easily be rewound. Arming the clock and setting the time – it’s done discreetly from below, sparing the eye a glance at perhaps unwelcome “interruptions” in the clock’s lines.

The entire clock was fabricated in L’Auberson, in the Swiss Jura, in the workshops of the De Bethune Manufacture.