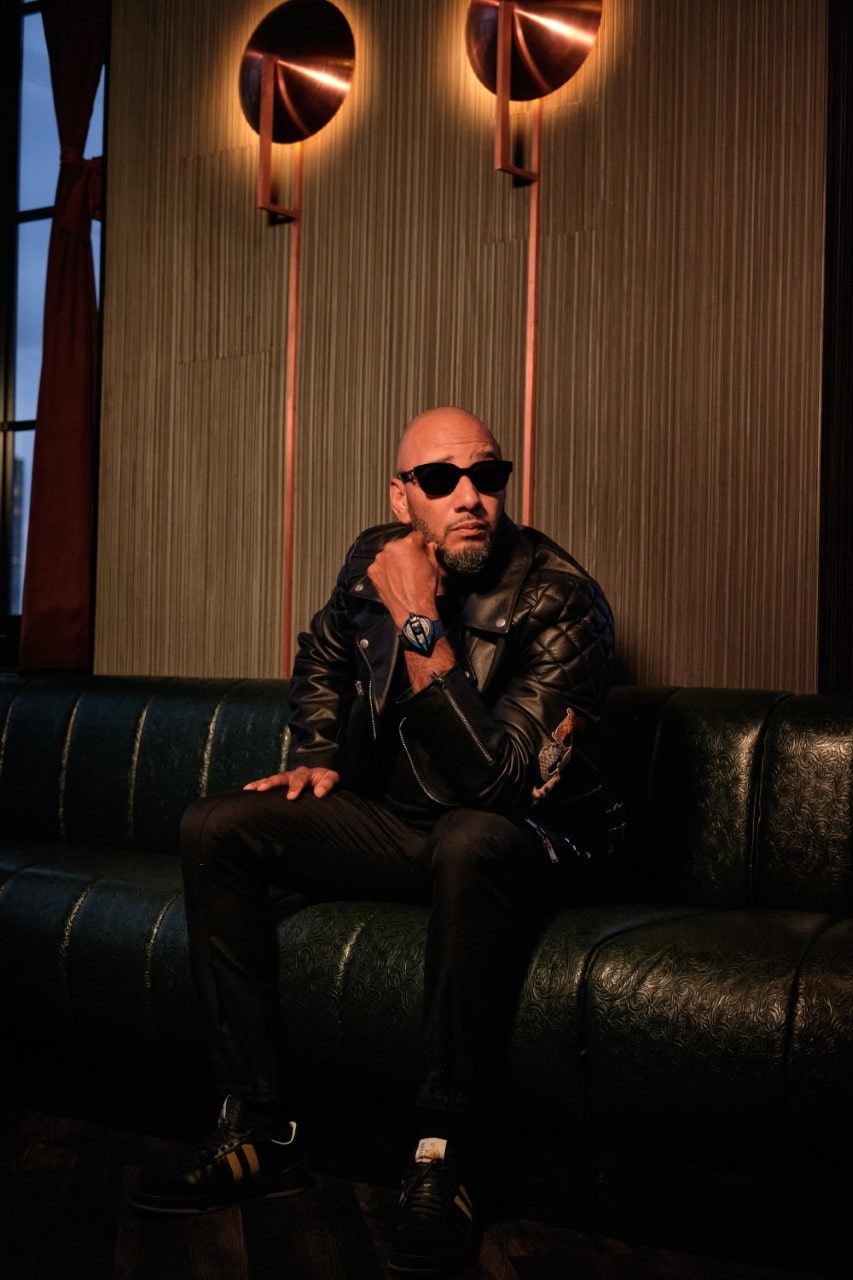 De Bethune presents the Dream Watch 5 Tourbillon ‘Season 1’
This timepiece is the result of a genuine challenge issued to De Bethune by the American star Swizz Beatz. Denis Flageollet and his team came up with a response. Mastery of sapphire crystal, skilled workmanship in titanium, horological virtuosity: the outcome is an exceptional timepiece, breathtaking in its singular technical sophistication and aesthetics, as visually understated as it was complex to create. Only 10 of these timepieces will be produced.
This watch does not stem from the kind of collaboration to which the watch industry is accustomed – in fact quite the opposite. Driven by a spirit of going further and indeed as far as possible, it is the story of an authentic challenge set by American rap star, producer and talent scout Swizz Beatz. He spontaneously contacted De Bethune in 2020 and dared the Swiss watch manufacturer to create a totally different Dream Watch 5.

Master Watchmaker and brand founder Denis Flageollet set to work with his team on creating a timepiece that would convey his resolutely futuristic vision of the watchmaking art. The design of this watch was to be fully in line with their existing achievements, yet at the same time challenging them to create a singular, refined and sophisticated timepiece that would remain user-friendly and easily legible, based on materials and construction typifying De Bethune's quest for contemporary aestheticism.

Entirely themed around the concepts of light and transparency, the project appeared to offer a new field of research, an opportunity for a different interpretation. A fresh approach to the use of sapphire crystal; blued titanium as the keystone; a movement with multiple reflections and finishes finally revealed to the observer’s admiring gaze: the equation began to take shape and now unveils a unique result, breathtaking to those who capable of perceiving the extreme complexity of its creation.

Contemporary creations
Among the various collections, the one titled “Dream Watch” encompasses the most experimental creations. Impossible to classify, it is at once the most extreme form, yet also the one that best reflects the philosophy developed by the brand, i.e. an approach involving fundamental exploration of watchmaking. A veritable wrist sculpture, Dream Watch 5 derives its distinctive shape from its predecessors, from the bridge of Dream Watch 1 to the case of Dream Watch 4, and is thus part of ongoing research into shapes, materials and colours. With each new creation, the design is refined in the direction of a curved deltoid motif, a major component of the aesthetics of the collection and more generally of De Bethune watches.

The DW5, a stature naturally conducive to transparency
Amid the vast range of horological complications and skills in which De Bethune has become a virtuoso, the mastery of sapphire crystal has played one of the leading roles for the teams at the Manufacture in the Swiss Jura town of Sainte-Croix.
De Bethune has been a pioneer in the use of this technical material, generally used in watchmaking to produce glasses or cases – and always in constant, regular, flat or spherical shapes. The Maison has instead taken a path less travelled by introducing sophisticated and unexpected applications. As early as 2008, De Bethune produced the first sapphire crystal hands, encircled by blued titanium, to be fitted on the DB26QP. This was followed by the production of movement components, including the famous delta bridge of the DB28 Steel Wheel movement, ingeniously complemented by two small barrel covers, also made of sapphire crystal, enabling users to immerse themselves in every last detail of the mechanism.
There is nothing straight or flat about the DW5 case, nor any constant radius or regular lines. Its design pushes the envelope in terms of exploration and research.

Far from simply carving the case from a single block of sapphire using customary traditional methods, Denis Flageollet endeavoured to adapt the sapphire to the watch's titanium case. This was no small technical challenge, as the team had to insert no less than seven different sapphire parts – each crafted with unique curves and proportions – which would then be perfectly embedded into the blued polished titanium exoskeleton.
This involved extremely complex adjustment work, meticulously performed by the most expert hands. No rough edges could be tolerated. Every tiny angle detail must be controlled so that the result features lines that are entirely smooth both visually and to the touch: a true technical feat. Aesthetically, the blue-tinted sapphire matches the blued titanium of the case middle and the cold light emanating from it magnifies the shimmer of the movement finishes.

The dial side reveals the small two-tone sphere indicating the moon phases. Composed of two assembled and polished half-spheres in blued steel and palladium, it guides the eye towards the minimalist digital display of the hours and minutes, visible through a hand-cut cabochon-shaped crystal such as only a select few are capable of producing.

On the back of the timepiece, the sapphire crystal creates the illusion of a magnifying glass effect enabling even greater appreciation of the beauty and elegance exuded by the DB2149 calibre and its tourbillon, fully revealed for the very first time. Visually very technical and extremely slender, it is truly showcased by its blued crystal surround.

Superlative timekeeping precision
While De Bethune is dedicated to pursuing an aesthetic and creative approach to the DW5, the team remains faithful to the essence of watchmaking, which involves developing and producing the most accurate possible timepieces. In the case of the Dream Watch 5 Tourbillon 'Season 1', the mechanical hand-wound DB2149 movement incorporates a high-speed tourbillon developed by De Bethune.
Ultra-light at a mere 0.18 grams for 63 components and beating time to the nearest tenth of a second, it makes a complete revolution in 30 seconds. These three key elements determine the precision of a tourbillon and De Bethune has chosen optimum performance for each.

The calibre houses a titanium balance-wheel encircled by a patented white gold ring, a balance-spring featuring an in-house developed and patented De Bethune terminal curve, and a silicon escape-wheel oscillating at a rate 36,000 vibrations per hour, which gives it superior chronometry. The likewise inhouse developed self-regulating twin barrel ensures constant torque for the calibre. All this has enabled the movement to gain 20% in terms of power reserve.

The time can be read off in digital format through a trapeze-shaped sapphire aperture with a jumping hours disc and another trailing minutes disc. The centre displays the regular rotation of the spherical moon phase, a patented complication so accurate that it requires adjustment by lunar day only every 1,112 years. The watch is wound and set by means of a crown adorned with a blue cabochon-cut sapphire.

Supremely refined finishes provided by the deft hand of the engraver Michèle Rothen
The De Bethune approach to artistic crafts bears vibrant tribute to human skills. Among the various handmade decorations specific to De Bethune movements, the mirror-polishing of the movement components creates an astonishing play on light. The surface of each component is patiently polished until it becomes a real mirror. It can take up to several days of polishing of the different parts to achieve this result.

Inside the case, by dint of craftsmanship involving a blend of engraving and micro-sculpture, the work of Swiss engraver Michèle Rothen – who has been collaborating with Denis Flageollet for many years – consisted of patiently and meticulously raising the material with the tip of her burin. She thus retouched each surface state, each micro-detail and each relief in order to "lift" the design and thus perfect the whole – a process much like redrawing the piece one last time and thus enabling it to catch the light even more generously.

Blue, a fundamental element
Finally, for De Bethune, the colour blue carries a broad and deep meaning, associated with the notion of fullness: within oneself or beyond, and extending to the unfathomable infinity of the universe, the source of life. Evoking water, sky and space, it is envisaged by Denis Flageollet as a luminous vibration. "The cosmos, the heavens above… when you want to see time evolve and you have no instruments, you observe the sky. This is one of the recurring themes in watchmaking.” Since the foundation of the brand, blue has been intimately associated with the technical and aesthetic research and development of the maison. The Dream Watch 5 Tourbillon 'Season 1' will be a single-colour version. The radical and mesmerising blue of the different materials stems from artisanal and natural treatments specific to each.

Faithful to the codes of Manufacture De Bethune, the Dream Watch 5 Tourbillon 'Season 1' remarkably perpetuates the heritage of its predecessors: a contemporary and audacious aesthetic, along with perfect balance, dedicated to serving an exceptional mechanism.

A 10-piece limited edition presented by De Bethune with the collaboration of its friend and fine watchmaking connoisseur Swizz Beatz.