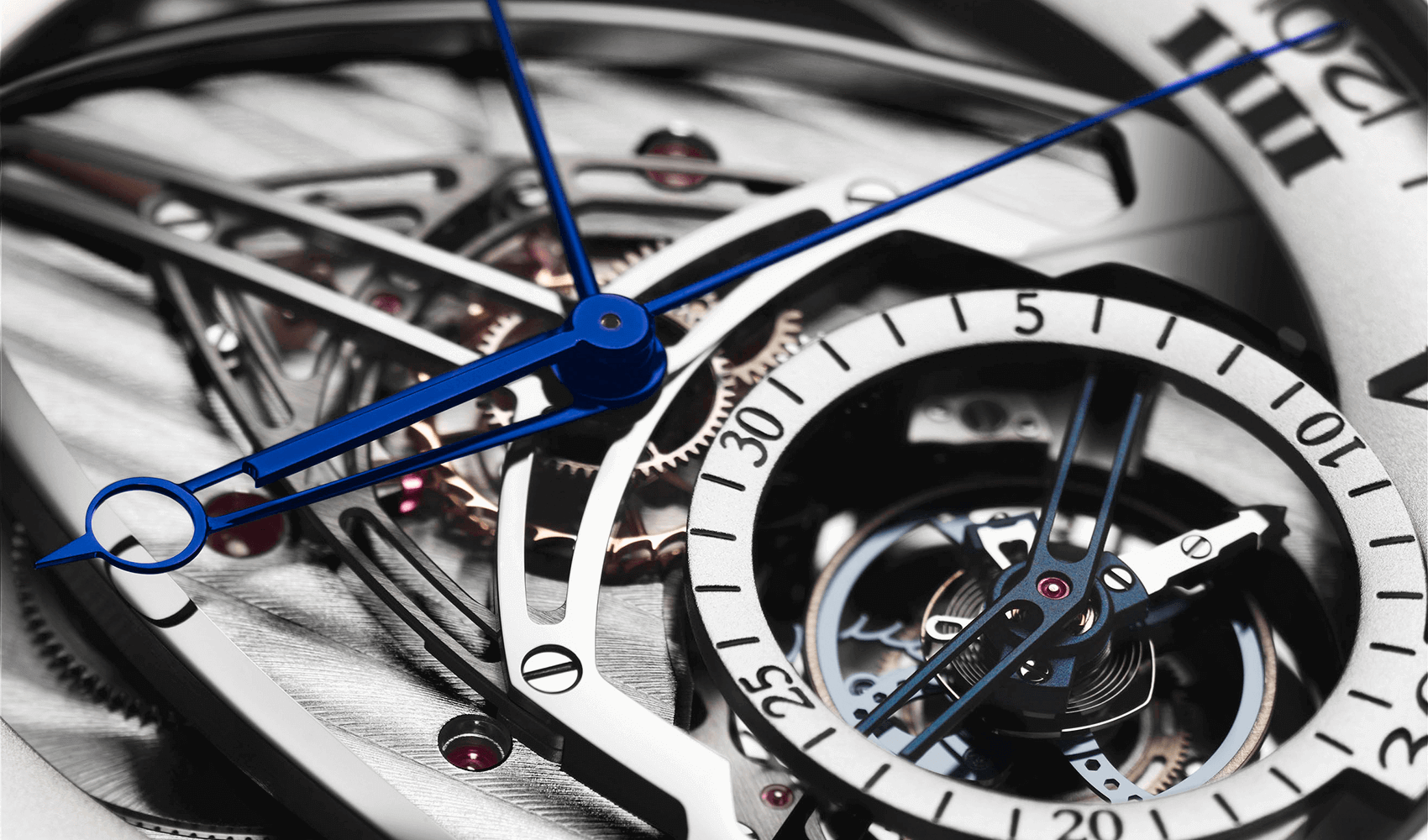 Immerse yourself in the heart of the Manufacture and its cutting-edge technologies, in keeping with the spirit of the great 18th century master-watchmakers.
Tourbillons, perpetual calendars, chronometers, deadbeat seconds, spherical moons, bridges, wheels, pallet-levers, balance wheels, pinions, balance springs and screws as well as cases, dials, floating lugs and hands... Each component is individually designed and crafted with meticulous attention to the slightest detail, including the traditional “Côtes De Bethune” and Microlight engraving. 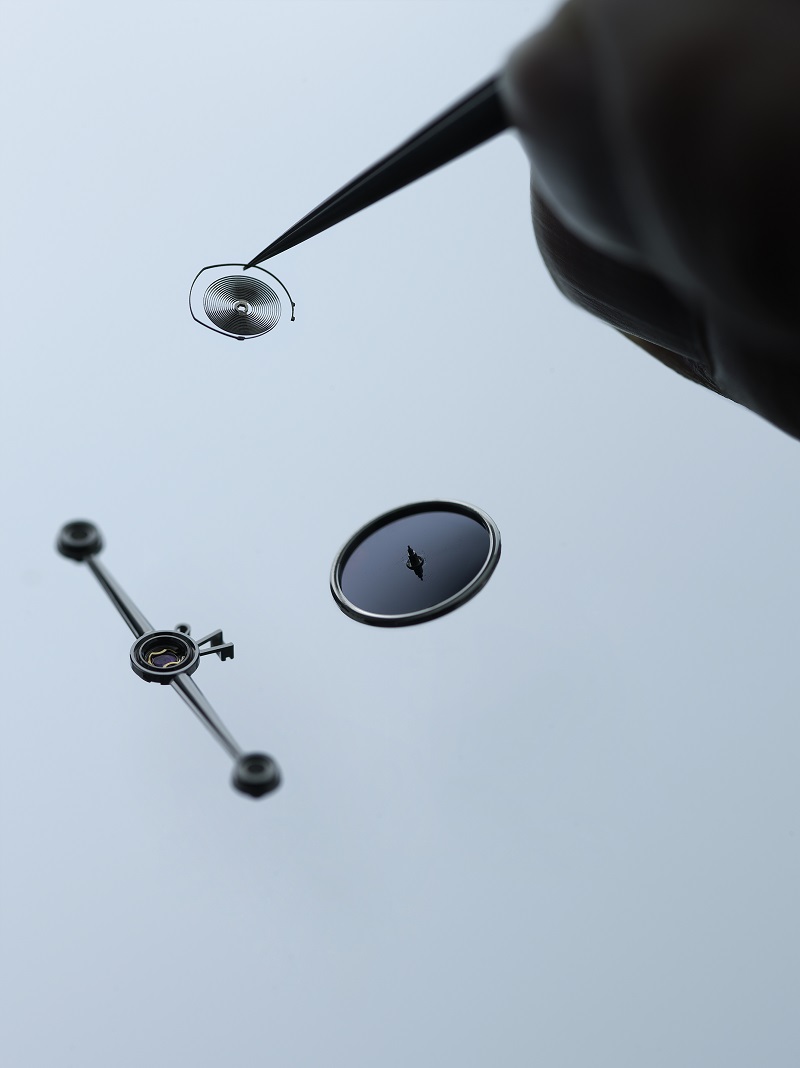 In seeking to optimise the operation of the balance-spring, the extremely small hairspring regarded as the soul of the mechanical watch (and which has paradoxically evolved very little since the early 19th century), De Bethune once again began exploring a field where everything seemed to have already been invented.

In order to work properly, the balance-spring must develop in a perfectly concentric manner and ideally requires a flat curve. In real life, everything conspires to prevent it oscillating consistently at the same frequency. To achieve this, De Bethune had the idea of keeping the centre of gravity precisely in the centre by using a flat curve affixed to the outside of the balance-spring. Various blade thicknesses thus further enhance almost the almost perfect accuracy of its concentric development.

The many advantages of this approach involve reduced height, enhanced concentricity, finer adjustment of the index, elimination of the need for pins, as well as the fact that the shape of the curve acts as a shock-absorber in case of impacts, and that the internal structure of the matter remains intact because it has been “neither stressed nor bent”.

The evolution of patented balance-wheels

Denis Flageollet’s ongoing research into improving the operation of the balance-wheel is nurtured by a physics- and maths-driven approach. Fundamentally, this component must have the greatest possible inertia, as well as being as light as possible. The approach will thus involve identifying the lightest material for the centre of the balance-wheel, while adding to the weight of the exterior so as to improve inertia. All of which must of course be achieved within a reasonable diameter.

Everything is about compromise, about constantly striving for improvement, which is why balance-wheels have constantly evolved at De Bethune.

Titanium, white gold, palladium, silicon: fundamental research on materials has also entailed research into temperature changes. Fitting inertia weights or a ring on the outside, creating alveoli and other solutions, are all part of this in-depth and never-ending work on sensitivity to magnetic fields, inertia quality, aerodynamics, efficiency, reliability and adjustment quality.

The measurable result is that De Bethune has already improved the efficiency of its sprung-balance-escapement ensemble by achieving a 20% increase in power reserve. 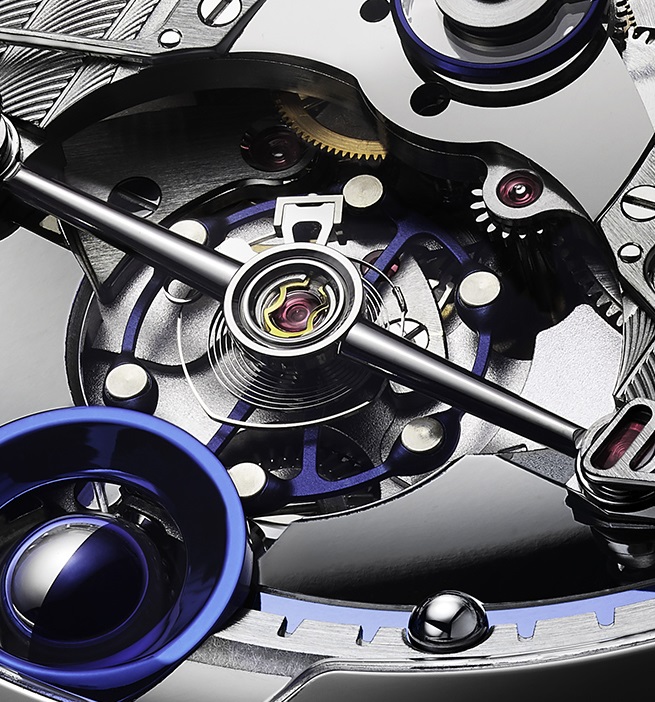 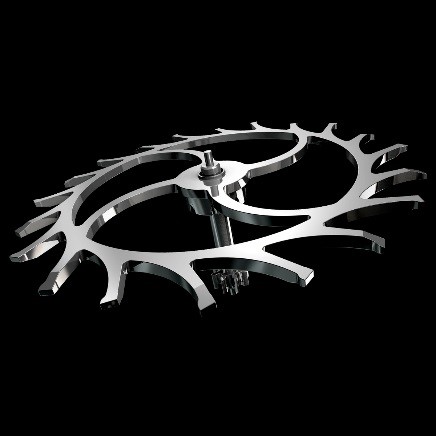 Innovation and watchmaking tradition are not mutually exclusive. The De Bethune approach to the art of watchmaking has always been firmly in the vanguard of technological advances. It is against this background that brand founder and Master Watchmaker Denis Flageollet showed a pioneering interest in silicon. In 2003, the material was new and still unknown in watchmaking. There were still no suppliers in Switzerland. De Bethune was one of the first to begin testing, particularly in the area of tribology (the science of friction). The objects were to understand and explore what applications could be found; in what direction such research could be taken; with what other materials silicon would work best; as well as to what extent it could be cut and refined. This proved a key learning phase from which De Bethune timepieces were to benefit from a very early stage.

In 2006, the Manufacture tested movements with silicon escape-wheels, as well as filing a patent for its all-silicon self-compensating sprung balance. That same year, as part of its work on high frequency, a field where fundamental research in mechanics is reaching new heights of precision and unprecedented frequencies, De Bethune presented an experimental tourbillon watch featuring a 72,000 vibrations/hour silicon escapement as well as its self-compensating sprung balance.

In light of these trailblazing developments, Denis Flageollet decided from 2009 onwards to use silicon for all the escape-wheels of all movements as well as some tourbillon components. To date, De Bethune remains one of the only watchmakers to equip 100% of its calibres with silicon escape-wheels.

This mechanism endures no less than three successive mutual impacts between three mechanical parts, no less than 28,800 times per hour. This is due to its role in distributing energy to the oscillator, as well as halting and releasing the gear train with each balance-wheel oscillation so as to deliver an accurate indication of time. This makes it the most delicate watch mechanism to deal with.

By rethinking its design and making it from silicon, a material ensuring lower inertia, smooth-sliding shapes, less brutal impacts and maximum energy savings, De Bethune has made an authentic technological breakthrough on this mechanism well known to all watchmakers.

The measurable result is that De Bethune has already improved the efficiency of its sprung-balance-escapement ensemble by achieving a 20% increase in power reserve. 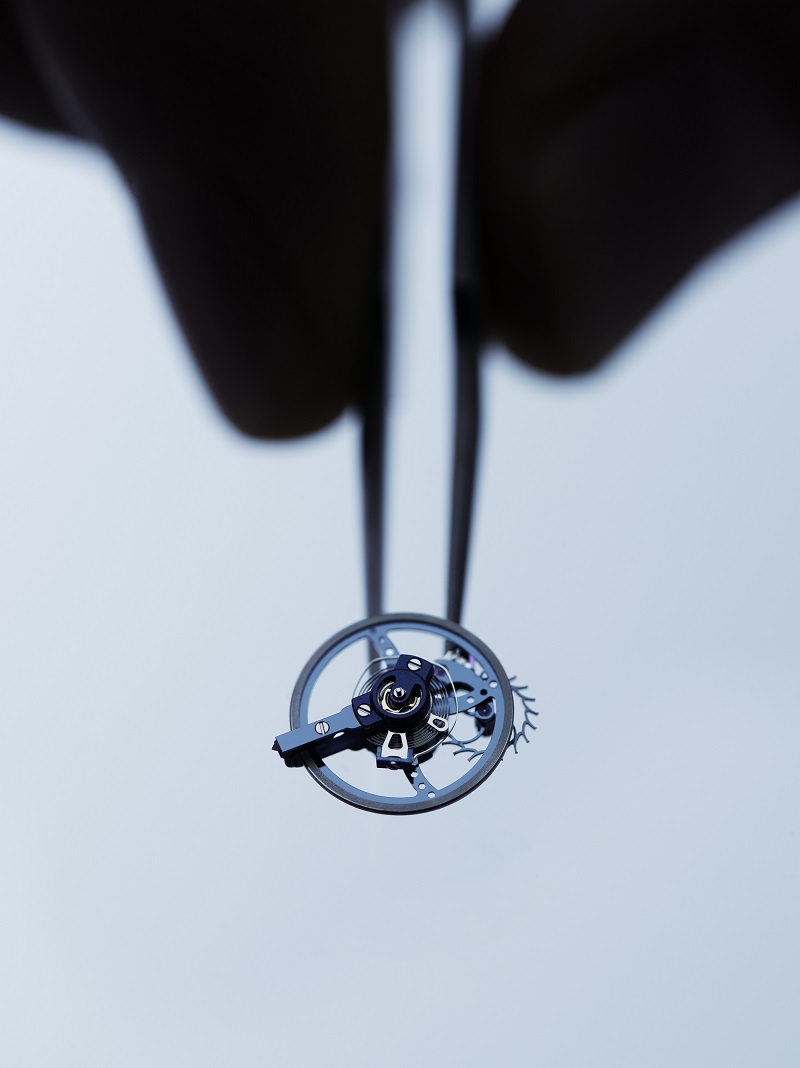 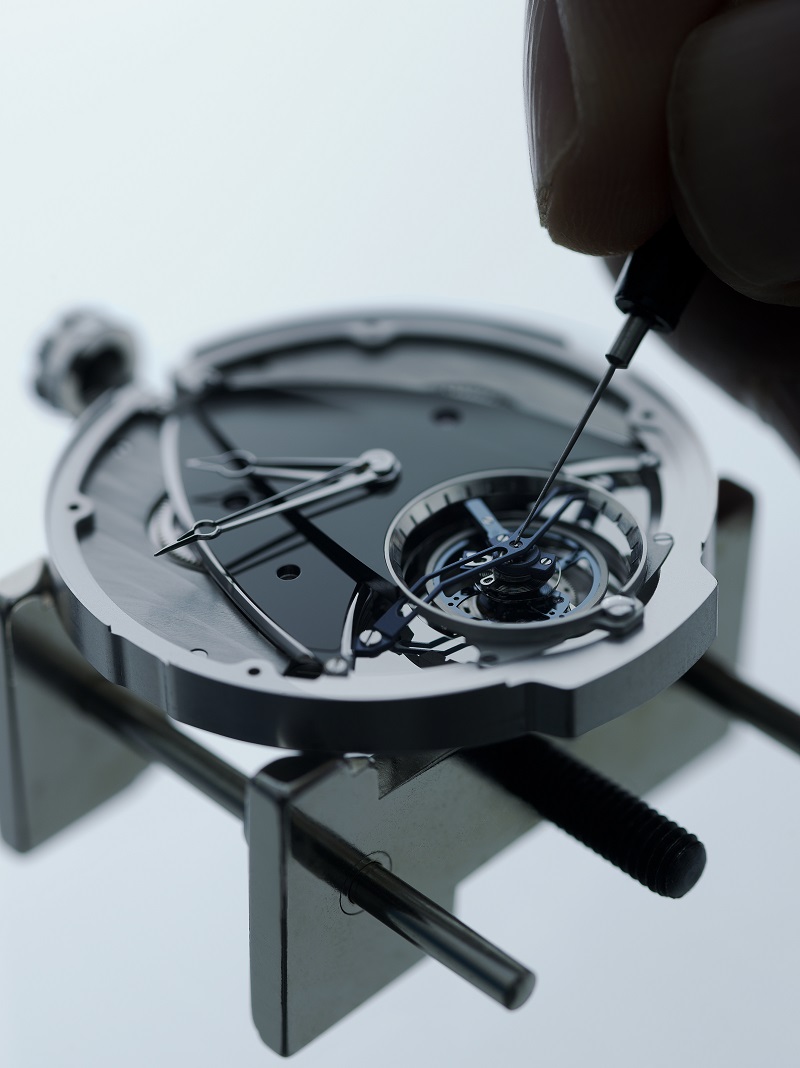 Just as Abraham-Louis Breguet had invented the tourbillon to meet the technical constraints facing marine chronometers, De Bethune invented its own version to suit the new dynamic of wristwatches. Today, a wristworn timepiece endure considerably more intense ‘torture’ than were marine chronometer’s in Breguet’s day. Changes of position are swift and random and the brutal kinetic forces to which watch mechanisms are subjected deserves close attention.

The equation? To be more efficient on a wrist engaged in rapid and disordered movements, the tourbillon must have the highest possible frequency and fastest rotation speed.

In creating a titanium and silicon tourbillon with a frequency of 36,000 vibrations/hour, an extraordinarily light carriage (0.18 grams, the lightest ever created) spinning on its axis every 30 seconds, comprising a total of 63 components (the lightest of which weighs less than 0.0001 grams!), this feat is easier to describe than to achieve. And much as on a flying insect, a small authentic ‘exoskeleton’ holds everything in place. Smaller, lighter, faster: the De Bethune tourbillon truly fulfils its purpose on contemporary watches.

Simplicity is the ultimate sophistication. Traditionally speaking, jumping seconds operate with their own gear train which implies more components and an additional concern for adjusting the parts to each other.

Based on this observation, De Bethune sought to simplify this mechanism by starting directly with the fourth wheel, and by adding an additional wheel driven by a balance-spring. Thanks to a twin lever, the hand of this jumping small seconds is “released” every second and can “jump” thanks to the stored energy – an ingenious solution. The result is fewer components, formidable efficiency, and a visually purer mechanism. Beauty is revealed through simplicity. 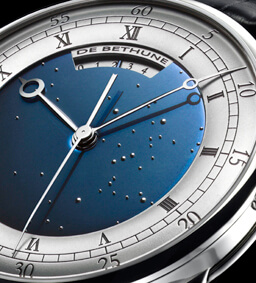 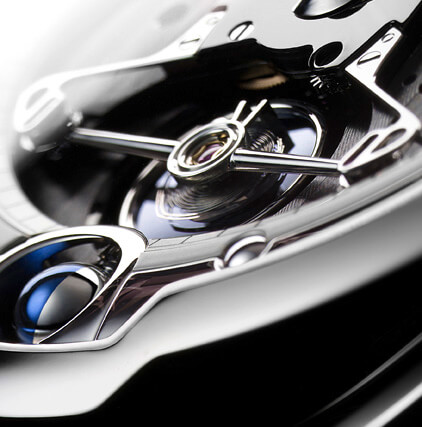 It is important for a balance-wheel to be properly secured, protected from shocks, as well as geometrically positioned in relation to the calibre mainplate.

Not only was De Bethune the first to develop a bridge symmetrically secured on both sides and thus serving to keep the balance-wheel perfectly in place, but it has also added two shock-absorbers on either end, as well as that of the balance-wheel itself. Hence the name triple pare-chute, featuring springs (instead of screws) fitted on perfectly polished arbors and serving to efficiently absorb and dampen violent impacts.

This is a traditionally heavy movement component, secured in the centre and which, if subjected to an impact, will have a brutal lever effect on the extremely fragile bearings.

To avoid this, driven as ever by a pragmatic physical and mechanical approach, De Bethune has devised an innovative system of tiny spring-feet arranged in a four-spoke rosette around the bearings, which dampens impacts and thus avoids any damage. The oscillating weight is no longer in danger and the bearings are also protected. 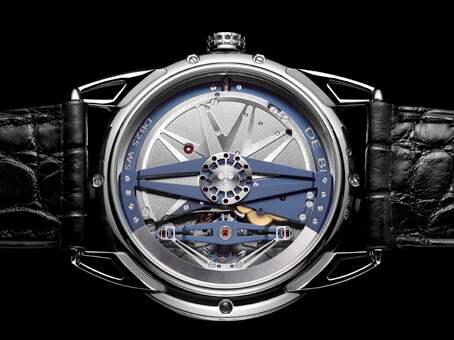 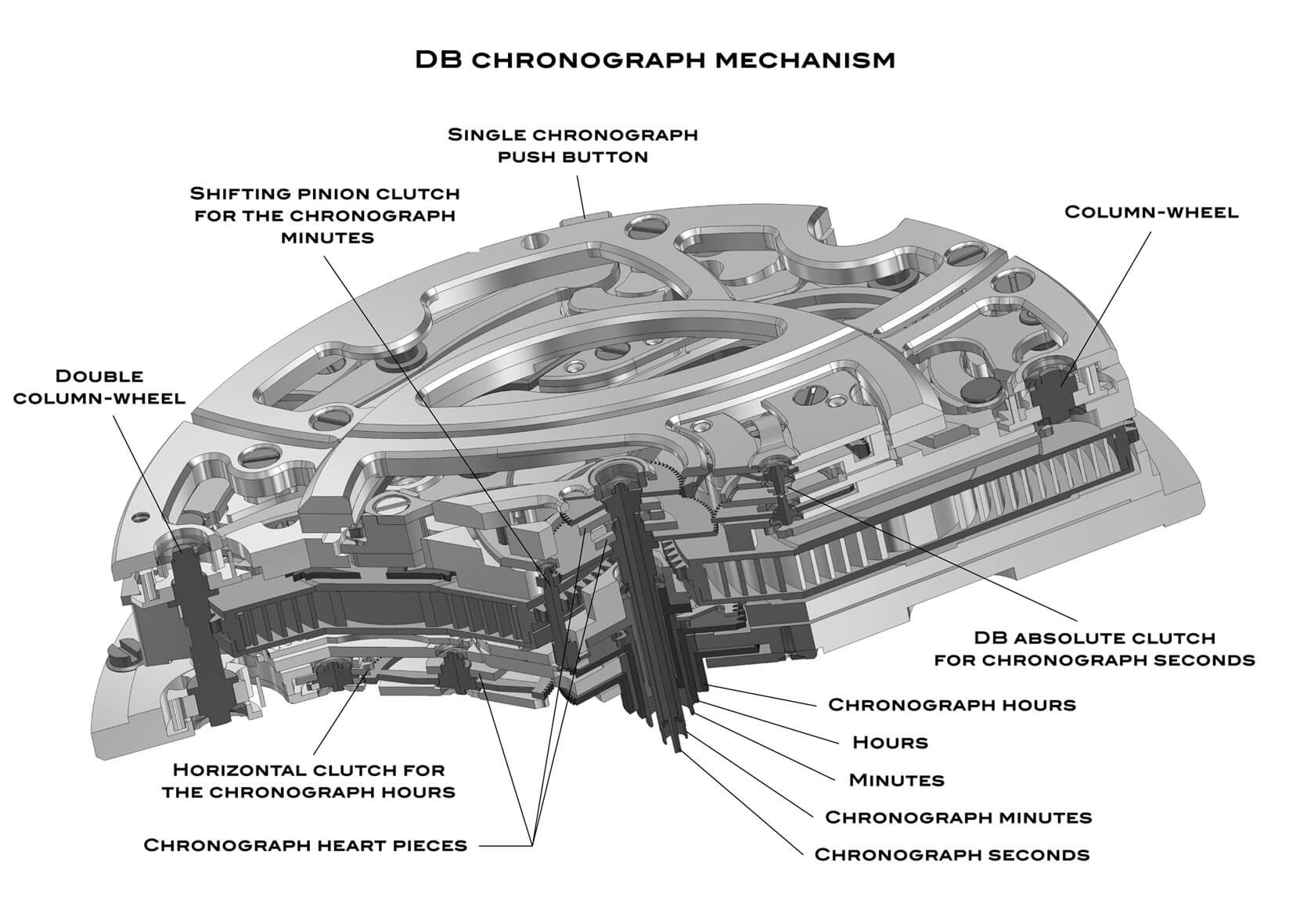 Seven years of research. Challenging, exploring, inventing… With the absolute clutch system, De Bethune has created a significant technological breakthrough in the history of chronographs.

One might sum up the issues in terms of excessive friction which disturbs the running of the movement in chronograph mode, as well as when operating normally, all of which leads to a recurrent loss of precision and reliability. It was thus essential to find an efficient, carefully guided clutch, mounted on a single arbor, requiring little energy as well as simple to assemble and set into operation.

De Bethune decided to look at the practical use of a watch from an unusual angle. Mechanical watches generally have a power reserve of just 36 to 48 hours.

By equipping the brand’s timepieces with a self-regulating twin barrel and by reducing all friction, impacts and other energy-consuming factors to an absolute minimum – notably by redesigning wheels with dedicated toothing, producing specific jewel bearings and ensuring the reliability of its escapement and oscillator system, Denis Flageollet has increased their power reserve to six days – the ideal period for alternately leaving the watch off the wrist or wearing it without having to reset it each time. 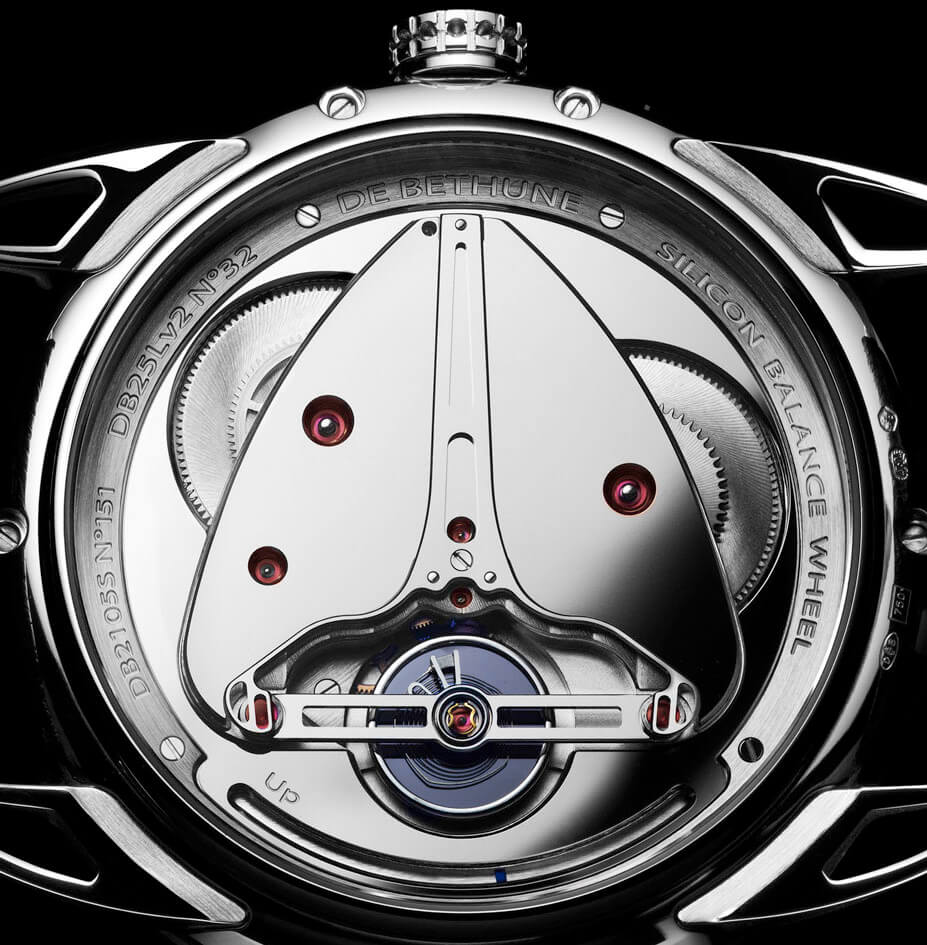 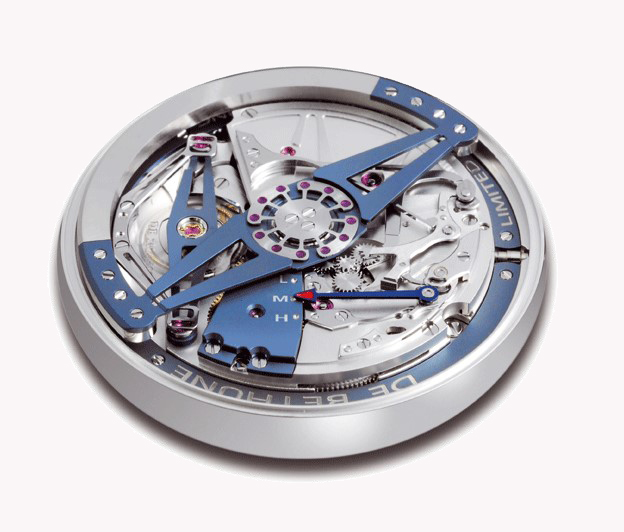 In traditional watchmaking, the winding speed of mechanical watches is generally calculated for a so-called “average” wearer, whereas in fact each individual is different. Some are very physically active, while others move less or are even quite sedentary. If the owner winds the watch too much, the spring is always at maximum tautness and this proves detrimental. Conversely, insufficiently wound watches perform less reliability and accurately.

De Bethune came up with the unprecedented yet extremely sensible idea of offering the owner of the timepiece an opportunity to choose its winding speed. Thanks to an ingenious system of levers operated by the winding crowns, combined with a red and black power-reserve indication on the dial, he can change the winding speed of his watch according to his activity: H for high-range sports winding, M for medium winding, and L for low-level winding. De Bethune is the only watchmaker to offer this eminently useful function.

Breaking free from the balance and hairspring principle invented by Hugyens in 1675, Denis Flageollet began exploring new paths from 2011 onwards, particularly in the field of horological résonique.

The principle is based on oscillators with mechanically driven high frequencies – up to 100 times faster than the frequencies currently reached – by means of vibrations and without friction or wear. The scope of research in this field was so vast – and as yet largely unexplored – that it is simply unpatentable.

Driven by a wish to share his discoveries in open-source mode, Denis Flageollet published and continues regularly publishing the progress of his work on this topic so as to contribute to the advancement of such research. The interest aroused by his publications has confirmed his initial vision and this path is now also being taken by other working groups in Switzerland. 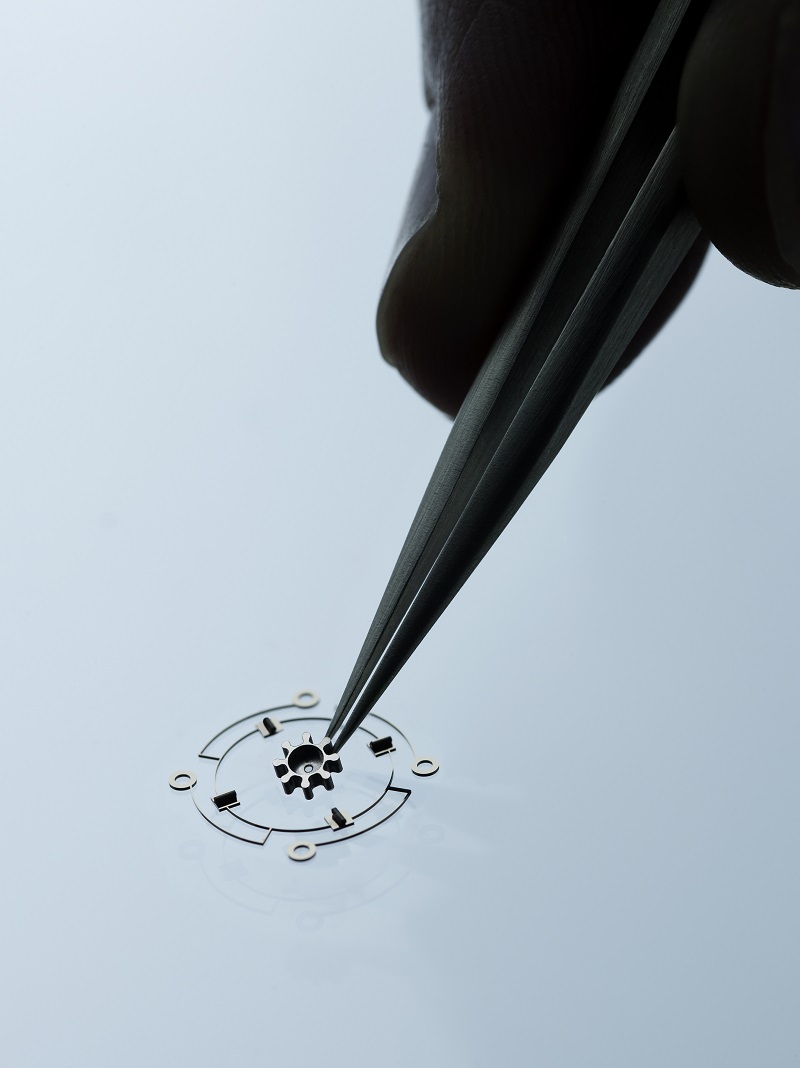 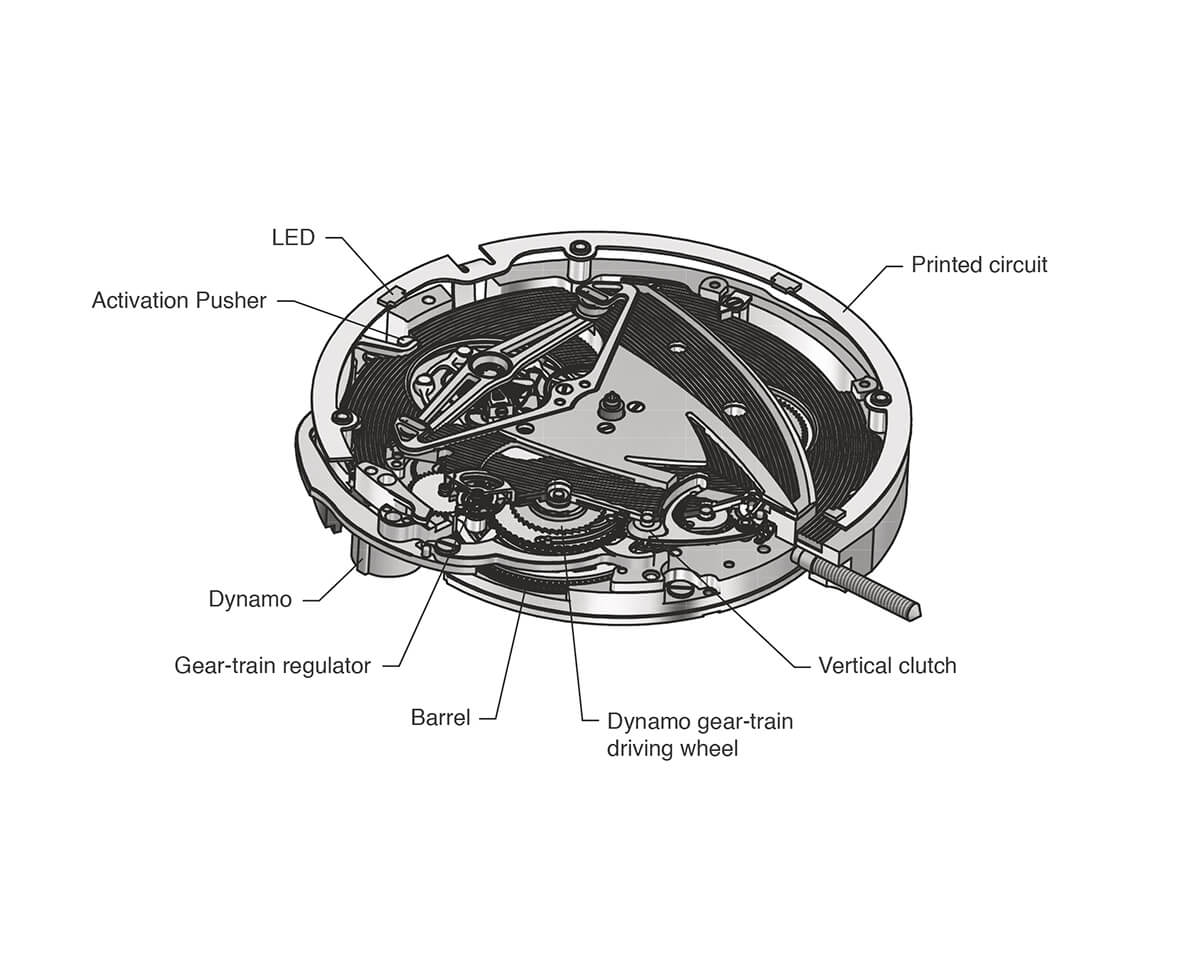 Based on the observation that a sports watch must be perfectly readable in any kind of weather and every possible situation, De Bethune developed a special illumination system for the DB28GS Grand Bleu.

The simplicity of this effect hides a very complex mechanics. Providing light on-demand with the same principle as a Grande sonnerie for the sound on-demand, the entirely mechanical diving watch is illuminated by pressing a push button at 6 o'clock, which triggers a small gear train driven by the double barrel. Fully mechanical, with no electronics and no battery, the gear operates with a miniature dynamo to generate the energy for illuminating the watch for a few seconds. More than enough to read the time, even in the middle of the night.